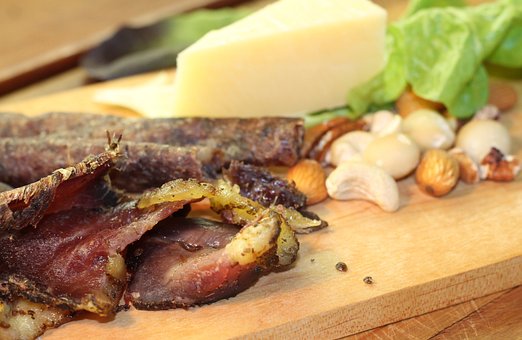 Jerky was initially introduced by the South American (Peru) native tribe called the Quechua (part of the ancient Inca Empire) in 1550. The merchandise (Ch’arki), was boned and defatted meat (deer, elk, or buffalo) cut into slices and rubbed with salt. This meat was rolled up in the animal’s hide for 10-12 hours and then sun dried or smoked over fires.

In South America, the Native Americans ate sun-dried venison and buffalo called tassajo, which was made with strips of beef dipped in maize flour, sun and wind dried, and then tightly rolled up into balls. North American Cree Indians mixed berries and suet (fat) with pounded cooked meat and pressed into concentrated modest cakes to make pemmican.

Biltong came from pioneering South African forefathers who sun dried meat while traveling across the African subcontinent. Folklore has it that African tribesmen would place strips of venison under the saddles of their horses to tenderize and spice up the meat! Seasoning became a blend of vinegar, sugar, salt, coriander and other spices.

As the Spanish arrived, the name evolved to charqui. During sea exploration and colonization, the Spanish sailors stocked the pacific islands with goats. What could not be eaten could then be cut into strips and hung in their boats to air dry. When the Spanish Conquistadors invaded the Americas, they were surprised to observe the natives of North America drying meat as well. Soon, the natives embraced the Spanish term, Charqui, just adding their emphasis; the word”jerky” first was.

North American Pioneers would first dry meat by hanging it on the outside of the covered wagon sun drying (2-3 days). Another method was to build a scaffold over a slow flame and smoke the strips. While the heat and smoke would finish the process in half a day, the smoking method required a stopover; it was not long before awareness for germs and disease became widespread and smoking became the norm.

Today jerky is made from thin strips of just about any meat or from chopped or ground and formed meat. Manufacturers spice and dehydrate the product; some introduce smoke or using liquid smoke for flavoring.